The Village was incorporated September 2, 1872 with Dr. Fillmore Bennett elected as its first president. Dr. Bennett authored numerous poems and hymns, including “The Sweet Bye and Bye.” He was also the first principal of Richmond’s grade school. In 2001, Bennett Park, one of Richmond’s four city parks, was dedicated in his honor. In 1906, Memorial Hall was constructed with a $10,000 bequest from Charles DeWitt McConnell, the grandson of William McConnell. Over the years, the building has served as a library, auditorium and school gymnasium, as well as serving as Village Hall and Police Department until 1993. The building has received several upgrades in recent decades and today houses a local theatre company as well as hosting community and private events. The Richmond Food Pantry has occupied the building for many years. During the late 1960’s and early 1970’s, new entrepreneurs arrived in Richmond and began repurposing the vintage buildings in the downtown area for new uses, Richmond was one of the first communities to carry out a revitalization program entirely with private funds. We are also home to a number of light and medium manufacturing operations. Richmond administers a revolving loan fund and property tax abatements for new or expanding businesses. Today, residents and visitors can enjoy shopping and dining opportunities in a wide variety of venues. Housing ranges from multifamily to new construction to stately Victorian homes from the late 1800’s. Richmond is home to four city parks, and is surrounded by nature and recreational opportunities through the county conservation district and nearby Chain O’Lakes State Park. Pedestrian trails connect hikers and cyclists with Wisconsin and communities to the south. In winter months, we are also connected to a regional network of snowmobile trails. Richmond is home to highly-rated schools from K-12, which consistently excel both academically and athletically. The Nippersink Public Library serves Richmond and the surrounding area.

Embed these ads anywhere HTML code is accepted by pasting the snippet below. 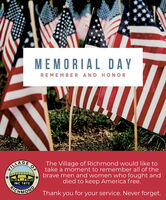